Know the Parts of your Charlotte Forklift and Their Function

Would you like to better understand what each component of a forklift is called, and what it does?

Whether your forklift is part of your Charlotte warehouse or out on a job site, you know the important role it plays to keep products and supplies moving. It's a valuable member of the team that carries the loads that would be impossible to move otherwise.

It's important for you, then, to know how your forklift works and understand the role of the parts of a forklift. If you want to buy a used forklift in Charlotte or are even considering renting one, you need to understand how this machine works.

Let's take a closer look at the parts of a forklift and what their role is in making the machine do its job.

The forks are attached to the machine at the carriage, as mentioned earlier. You can change out forks on a forklift, choosing, longer or shorter ones. You can also get forks in a variety of widths.

The load backrest is part of the forklift that keeps the load from sliding into the driver or falling in between the mast or to the ground. It's an upright flat surface at the back of the forks and in front of the mast. It helps to keep the load from moving around.

On the forklift the mast is the part that actually does the lifting. There are a variety of different types of masts that will adjust the height a lift can be raised. The chains inside the mast work with the hydraulic lift cylinder to raise and lower the load.

Forklifts can be powered from a variety of power sources. You should consider where and how you use the machine when deciding on a power source. Let's take a closer look at the power source options.

An electric forklift runs with a motor versus an engine. These machines run on an electric charge and need to get recharged. They don't release fumes and are good for indoor use.

A diesel-powered machine runs the engine using diesel fuel. This type of power is best used outside because of the fumes. Often a diesel forklift will be used at outdoor construction sites where it's used on large and heavy loads. 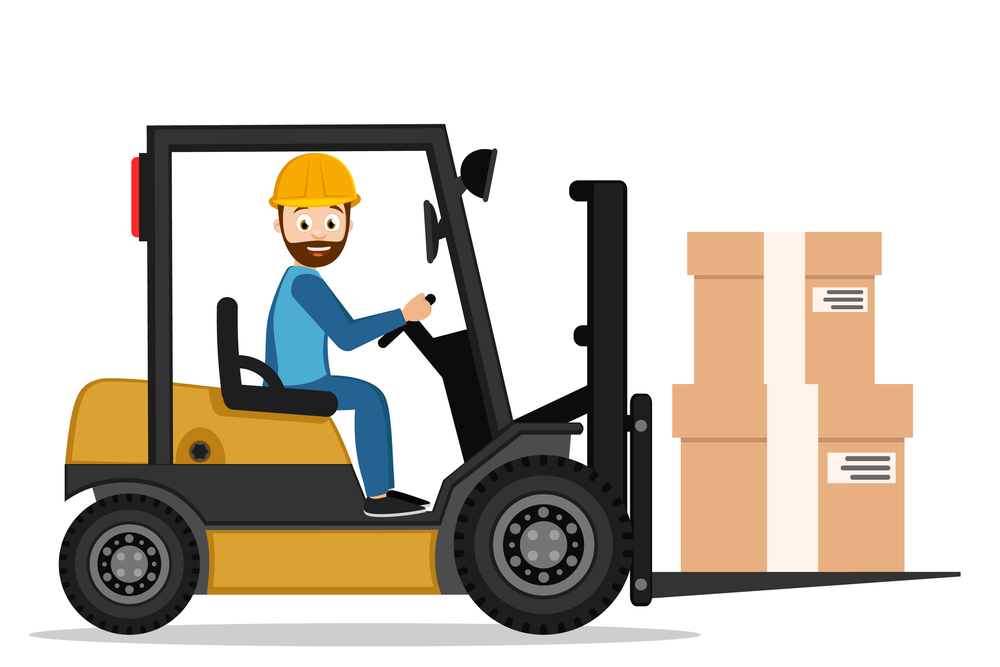 A gas-powered forklift runs a combustion engine. Like diesel, a gas-powered engine will produce fumes and are often best used outdoors.

Propane powered forklifts run from propane located in a tank at the back of the forklift. The tank is located above the counterweight. A nice feature of a propane tank forklift is the ability to swap out the tanks and keep the machine running.

The tilt cylinder works to move the mast, forks, and carriage forward and backward. Once a load is on the forks the tilt cylinder will tilt it backward towards the mast before raising the load. This helps to keep the load from falling.

Like power sources, a forklift can come with a variety of different tire types. The kind of tire you want on your forklift will depend on how and where you're using the forklift. Let's take a closer look at tire options.

A cushion tire gets pressed directly onto the wheelbase and made of solid rubber. These tires don't come with tread. Because they typically sit close to the ground and have a small turn radius, they are good for maneuvering around, especially inside a warehouse setting.

The solid pneumatic tire is the most common one found on forklifts today. They are also made of solid rubber but come with tread, making them useful for inside and outside use. While their cost is a little higher initially, they are nearly indestructible.

Much like a car or truck tire, this version of the pneumatic is air-filled. It usually comes with a deeper tread making this the tire choice for forklifts working outside in rough terrain.

Know the Parts of your Charlotte Forklift

If you're in the market for a new, used or rental forklift in Charlotte we can help. We also service and sell forklift parts. For information about the material handling equipment we sell, repair and service, contact us today!